The Truckers for Freedom Convoy is a True Grassroots Movement 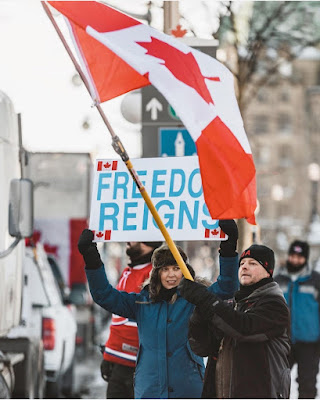 Supporters cheer on the arrival of the Truckers Convoy in Ottawa (@steveglwalsh / Steve Walsh Photography)
The ongoing "Truckers for Freedom" convoy is an example of a real populist protest and a genuine grassroots movement. It wasn't started by politicians or celebrities. It was started by truckers and other working class Canadians - insignificant "nobodies." It's not funded by big businesses or political parties, but $7 million (and counting) has been donated by thousands of individual Canadians.
Politicians like Jason Kenney and Erin O'Toole only voiced their support after the convoy started and it became apparent that hundreds of thousands of Canadians were cheering the truckers on. But no major politicians were involved in starting or organizing the convoy.
Contrast the MAGA (Make America Great Again) "movement" in the United States, which was founded and funded by billionaire-politician Donald Trump. MAGA was never a genuine grassroots movement. It was a cult of personality. So when Trump lost the 2020 presidential election, his "movement" was unable to move on.
A true grassroots movement is powerful because it doesn't rely on one leader. Erin O'Toole could get embroiled in a devastating scandal, embarrass himself on national TV, or even disappear to Costa Rica, but it wouldn't make a difference to the truckers convoy. A movement doesn't center around any one person.
Thousands of people from across Canada are driving to Ottawa to protest vaccine mandates specifically and all covid-19 restrictions more generally. All along the way, thousands more gathered by highways and parking lots to cheer them on. In just two weeks, nearly 800,000 people joined one Facebook group in support of the convoy.
The convoy is shaping up to be one of the biggest protests in Canadian history. Whether you like them or not, they cannot be ignored.